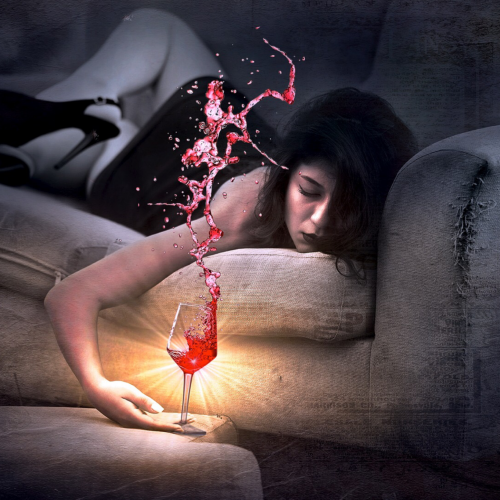 How many times have you heard this, said this and believed this? How many times have you used alcohol to help you to sleep? I did, all the time. Just a glass or five to knock me out! A stressful day at work would keep me lying awake at night thinking about everything I had to do the next morning but if I had a bottle of wine I would sleep like a baby, out cold, comatose – for most of the night anyway. Alcohol helped me to sleep, it is a fact, isn’t it? So why, if that is a real fact, was I always knackered. How often have I said, “oh I don’t have a hangover, I’m just tired?”

The real truth is that using alcohol to help you sleep is absolute bollocks. Alcohol is one of the worst things you can used to have high quality sleep. Even one little glass will disrupt your normal, healthy sleep pattern. The next day tiredness is part of the hangover.

So before I can explain why alcohol and sleep don’t mix, I need to explain why that first glass of wine makes you feel so relaxed.

Let’s imagine for a minute you had never drank a drop of alcohol in your life or you had been completely sober for 6-12 months. In your brain there is a pleasure centre which is influenced, in the main, by two main chemicals – dopamine and serotonin. In a sober person, these chemicals, which are responsible for generating desires and cravings (dopamine) and satiety and inhibition (serotonin) are in balance, like a see-saw, so when levels of dopamine go up, the levels of serotonin rise to bring them back down to normal again and vice versa. This works without any outside influences. But when we drink alcohol, this is disrupted as we release pleasure endorphins. Even the anticipation of a drink can make you release endorphins, explaining the immediate relief when you sip your first drink of the day. As a result of the endorphin release, extra dopamine gets flooded into the system making us crave even more of what we want – the alcohol. The brain, not realising that this was your intention, tries to correct the imbalance, so it send a depressant to the pleasure centre to reduce the pleasure – explains why we want more. The problem is, our balance tilts too far into the negative zone and you start to feel miserable and down, so we drink again and this time the gap and imbalance is even bigger – cycle cycle cycle!

At the same time as this, the alcohol affects other parts of the brain causing it to shut down. It starts to numb the senses (noise doesn’t bother a drunk brain), we slow down, speech slurs, vision blurs and we stagger. The brain also develops an “I don’t give a shit about the consequences, look at me I’m party girl” attitude! So in a very physical and chemical way, this whole thing gets worse and we get pissed.

So now back to sleep. The first thing to note is that as we get ready for bed, the brain naturally reduces its activity so we feel less awake. When we drink regularly the brain stops doing this for itself and relies on the alcohol to do this. That’s why people who quit alcohol find it so difficult to get to sleep for a while.

The second thing to note is that there are two states of sleep made up of slow wave or deep sleep and Rapid Eye Movement (REM) sleep. In a sober person there are approximately six cycles of REM sleep during the night. It isn’t really fully understood what REM sleep does for us, but studies in rats have shown that if they are deprived of REM sleep, they die in about 6 weeks (normal life expectancy 2 years). Sleep deprivation in humans has been shown to lead to cancer, diabetes, mood change, depression, anxiety and emotional trauma. Sleep literally heals the body and the mind. When someone drinks, even one drink, because of the dopamine and serotonin situation, nerve activity is reduced. When this happens, the brain tries to fix it and releases stimulants – slowly at first then more and more as the alcohol gets processed in an attempt to counter the effects. After about 5 hours after stopping drinking, when the alcohol has been processed, there are too many stimulants in the body and a deep drunken sleep turns into wide awake with anxiety or broken sleep that we put down to the hangover. In fact, you only have a maximum of two REM cycles in drunken sleep, so yes it may have helped to quite literally knock you out, but it can’t keep you there.

So, in a long term drinker, even someone who drinks small but regular amounts, sleep deprivation has been happening for years but they are so used to it, they don’t notice it – “I’m not hungover, just tired”. The body is in a state of permanent fatigue and at the end of the day when you slump into the chair feeling tired and craving your wine, it all starts again. It also explains why when you have a drink, you get the so-called ‘second-wind’ – all those stimulants!

Now for the good news, when you quit drinking and your brain starts to catch up to the fact that it isn’t getting any alcohol to switch off, it will start to work properly again, switching off the neurones and allowing you to feel naturally sleepy. This, coupled with the return of six cycles of REM sleep will start to give you some quality sleep back. This “I can’t sleep or I have anxiety since stopping drinking” will subside within the first 30 days. Why so long you might ask, well…. you’re catching up on years of shit sleep, that’s why quitting makes you tired initially! I think that one of the best things about getting sober was waking up feeling energised and ready to go instead of exhausted and groggy. Sweet dreams everyone!